Right To Play in Thailand

Right To Play has been working in some of the most marginalized communities in Thailand since 2002 helping to protect and educate children and youth. We have developed tailored programming for children and youth in transitory environments like migrant shelters, and youth detention and rehabilitation facilities.

Right To Play Thailand uses a partnership approach based on our robust relationship with the Ministries of Education and Justice and our ongoing work with local civil society organizations. In 2013, Right To Play and the Ministry of Education formalized their partnership through a Memorandum of Understanding intended to jointly promote holistic skills development in the country. A year later, life skills education and experiential learning methods were formally adopted into the school curriculum. Right To Play recently expanded its partnership approach to the regional level and is now an endorsed partner of the Association of Southeast Asian Nations Secretariat.

In 2020, Right To Play, together with the Liverpool FC Foundation, launched “Open Goals,” an exciting new initiative to enhance the psychosocial well-being and leadership ability of children and youth in low-income urban communities in Bangkok and Liverpool.

The challenges faced by children living in Thailand

Through rapid economic growth and investment in human capital, Thailand has made significant gains in human development. Despite this success, Thailand continues to be a country with high levels of inequality; an estimated 1.5 million children live below the poverty line.

Thailand’s overall success has attracted millions of migrants from neighbouring countries. Of the four to five million migrants estimated to be living and working in Thailand, one to two-and-a-half million are thought to hold irregular status. Without official documentation, irregular migrants and their children are vulnerable to exploitation and abuse.

Thailand has a high youth population -- approximately 20% of the Thai population are between the ages of 15 and 29. With youth literacy levels at 98%, Thai youth have the potential to contribute in positive and meaningful ways to Thai society. Yet youth in Thailand face many challenges including high levels of high school drop-out, mental health issues, drug abuse, and violence. 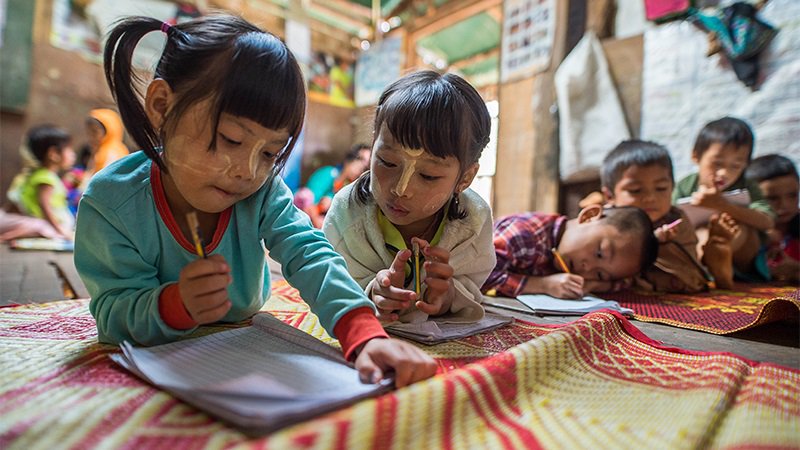 Building capacity and commitment for youth leadership and participation

Right To Play builds the leadership capacity of youth through training on life and sports skills, leadership, and coaching. One of the ways we do this is by establishing Youth Committees in temporary shelters for displaced persons to boost youth agency and participation.

At the regional level, Right To Play works with the ASEAN Secretariat to develop the leadership and facilitation skills of youth representatives from ten ASEAN member countries.

We also promote social connection through play days and sports events that build community understanding of and support for childrens' rights and participation.

And we work in juvenile centres, helping to build greater understanding and support for youth engagement and participation. In several cases, youth leaders and adults have worked together to co-lead activities for other youth in detention. 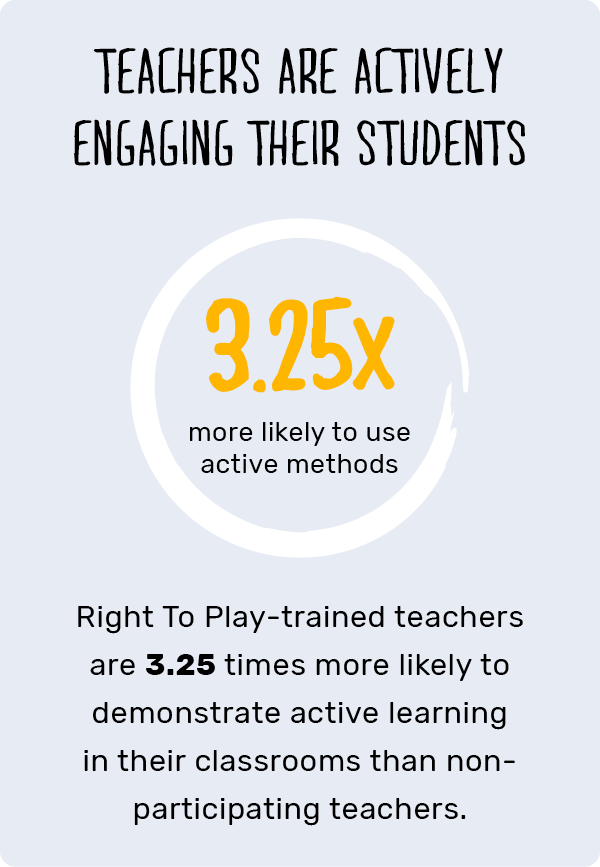 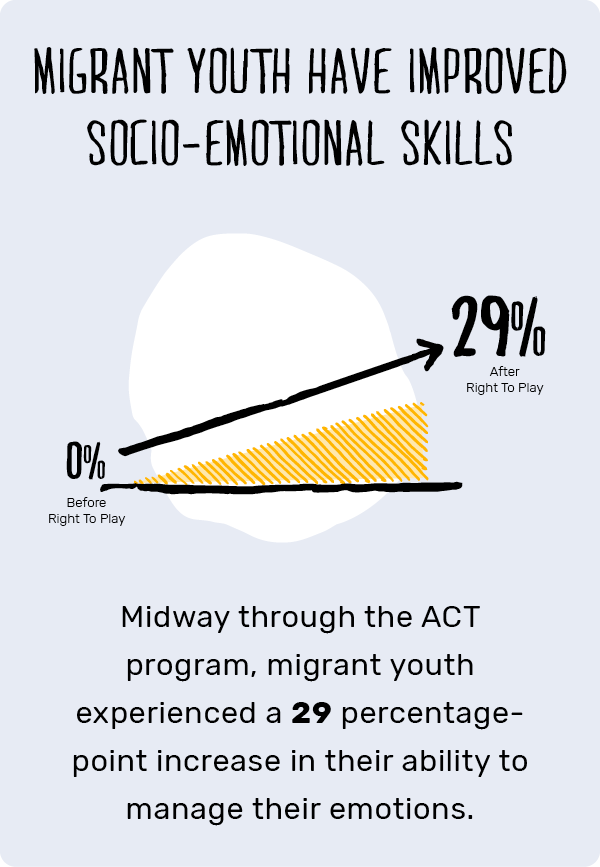 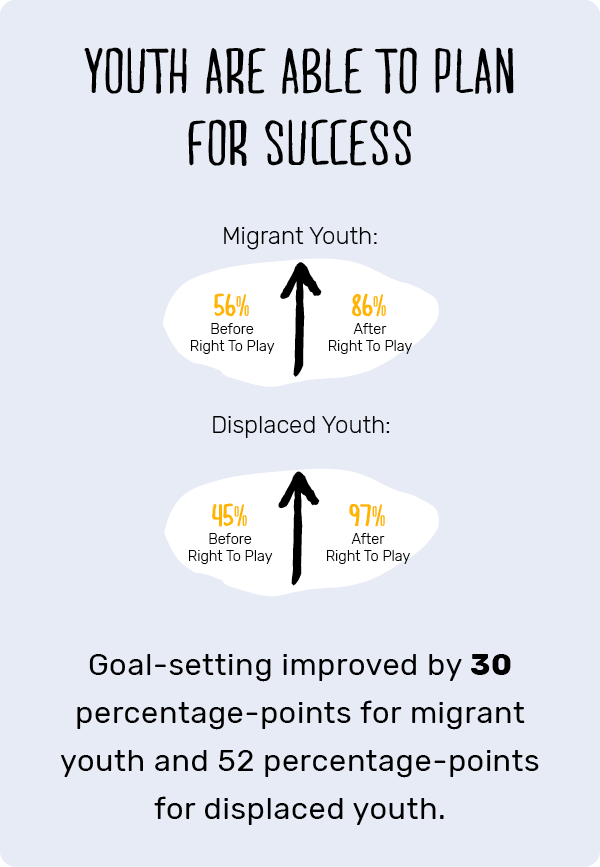 “Before, staff looked at things only from a disciplinary angle. Now things are changing. Staff no longer think of the youth just as prisoners.” — Director, juvenile centre

Strengthening the life skills of children and youth

Right To Play uses structured play and sport to promote life skills for children and youth, particularly focusing on the five key areas of life skills endorsed by the Government of Thailand. Working with the Office of Basic Education Commission and UNICEF Thailand, Right To Play designed life skills training for use in Thai schools. The 21st Century Skills Education Teacher Manual, combined with the “I am a teacher of the 21st century” campaign has helped to spread acceptance of play-based methodologies amongst teachers and education officials as an effective way of teaching life skills.

We also worked with the Department of Juvenile Observation and Protection to train all physical education teachers working in youth centres on the department's “Sports Classroom” policy. Through this work, we supported youth to develop life skills, and to positively engage with their communities and neighbouring schools in preparation for reintegration. 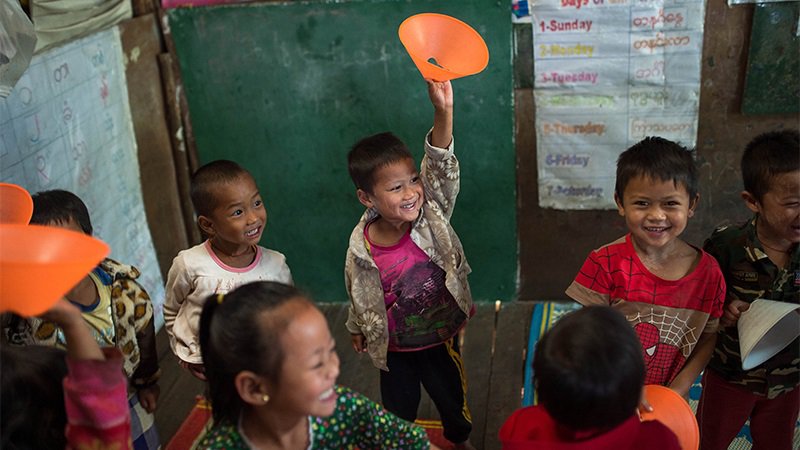 Promoting access to quality education for displaced and migrant children

Many migrant children attend Migrant Learning Centers (MLCs) instead of Thai public schools, and we strive to ensure that teachers in MLCs can also receive training, coaching, and support. Through our work, we also strive to specifically address the educational needs of migrant children with disabilities.

Stay connected with youth in Thailand

Right To Play gratefully acknowledges the support of all of our financial and technical partners. Supporters of our programs in Thailand include the IKEA Foundation, the Laureus Foundation, UNICEF, Norwegian Ministry of Foreign Affairs, the Kristian Gerhard Jebsen Foundation, DKSH Holding AG, Slaight, Irish Aid, the Liverpool FC Foundation and supporters like you.